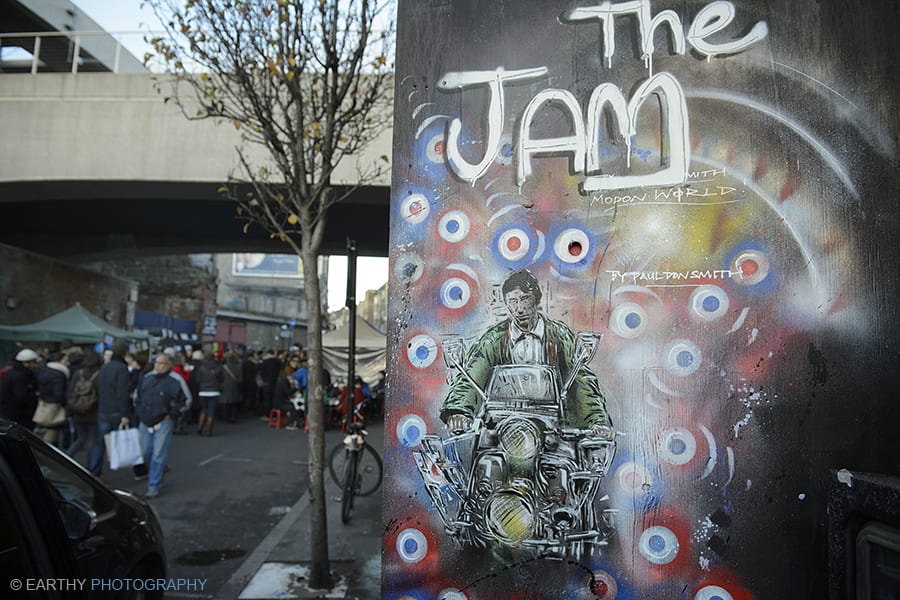 Brick Lanes’s origins stem back to the 16th century when it was originally just a path running across a field. Situated in East London it has long been a place a place of immigration and was settled by a Jewish community that in the 1930’s gradually moved to North London. After the Second World War the area saw an influx of settlers from Bangladesh that found work in the Jewish tailor shops that they later took over. Today the area is the heart of the city’s Bangladeshi-Sylheti community … which is noticeable on Brick Lane’s street signs that are written in both English and Bengali.

Vintage clothing can be found everywhere in shops and markets. Half way up the street on the left (between Hanbury & Woodseer St) we found a large basement market hall that had many stalls. It was a fascinating place with everything for sell you could possibly think off. Oh! to be young and a student again.
Just as fascinating for me were the people that sold the clothes, wonderful characters and I asked a couple of them if I could take their portraits. They kindly obliged.

If you were not hungry before visiting Brick Lane Market you will be after just a few minutes. We walked into the large brick building The Old Truman Brewery (it was a brewery until the 1980’s) on the corner of Brick Lane & Hanbury Street. It was a hive of activity with traders offer cuisine from around the world, I went for Spanish fried beef & chilly – heaven. This was real street food and it had to be taken outside and eaten on the street and we joined the masses doing the same thing.
Later, passing by the Boiler House Food Hall, Marianne (who is Swedish) noticed a stall selling genuine Swedish food – we have never seen that done before … I could tell she contemplated eating lunch again.
Later in the afternoon we found a small cafe in another food market and took sweet tea and home made carrot cake served by the owner – a very cheerful American lady.

World famous for its Graffiti Art Brick Lane has featured famous artists such as Banksy. The art is everywhere, not only large pieces adorning complete walls but very small drawings that can be found in obscure places. I found the best way to take it all in was just to stop and observe the surroundings, the more I looked the more I saw, and what I saw probably wouldn’t be there on a next visit. It would be something new. Brick Lane is forever changing and renewing itself – as it has done for 500 years.